As of recent years, the offer on power LEDs has broadened and this technology seems to have a bright future in our lives replacing the incandescent light bulb. I have decided to write this article about the ways to powering LEDs because many people have asked me what type of circuit they could use.

Compared to light bulbs, LEDs are a little bit more complex. When you need a light bulb, you buy one with the appropriate voltage given by your power source and the required power depending on how much light it has to give. Things are rather simple.

With LEDs it is a more complicated. First, they are not linear devices. A light bulb is mostly like a resistor when you are close to its normal operating point. If you apply 10% more voltage, you get 10% more current through it and it consumes 21% more power. LEDs, as their name implies, are basically diodes. And diodes are nonlinear. The current that passes through them depends exponentially on the voltage applied. Therefore, if you apply 10% more voltage to a diode, chances are you might get even 100% more current. This can be expressed as: the current through the LED varies in a wide range for a very low voltage change or the voltage across the LED varies in a low range for a high variation of the current. You can observe this from the diode characteristic, I recommend reading the wiki on LEDs.

As you can see, the voltage needs to be higher than a threshold in order for the LED to conduct. This is the minimum voltage that the LED needs in order to produce light. From further on this article will assume that the LED voltage is at least this value, thus it is on and it emits light. There’s no point in talking about turned off LEDs, is it?

Due to physical reasons which I will not discuss here, the amount of light a LED gives is dependent on the current that flows through it. Therefore the current is the parameter that needs to be controlled when powering an LED. And this is where the problems start. A battery gives you a constant voltage (well it varies depending on load and charge, but it’s a voltage that it gives you). A power supply gives you a constant voltage. Therefore a circuit is needed that can supply the constant current required.

All this circuits presented are well known and had been around for a long time, being used in many applications such as amplifiers, my goal being only to gather here as many of them as possible. The explanations are short and I assume you are familiar with basic operations of various components and different laws. Also, for simplicity I have chosen to show single LED on the schematic, but more LEDs connected in series can be used instead. Therefore, let’s look at different options, starting with linear circuits:

This is the simplest circuit. A resistor in series with the LED limits the current. In order to calculate the value of the resistor R we need to know what current is needed through the led, the voltage across it at that current and the supply voltage: 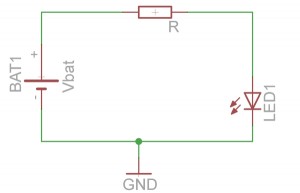 Or, going around the other way, the current through the LED can be expressed as:

As we discussed, the voltage across the LED varies a little for a broad range of currents, therefore we can consider VLED a constant. So is R. So the current through the LED is now dependent only on the battery voltage, Vbat. If you power the LED from a battery or any other supply that is not well stabilized the voltage given will vary, and so will the current through the LED which is an undesirable effect. This circuit is generally used where LEDs are indicator lights, such as whether a device is turned on or not. The variation of light output depending on voltage is in no way critical here. This circuit is not suitable for using with high power LEDs that are used for lighting; still you may find it in many low cost flash lights. Even more, some very low cost devices even omit the resistor and rely on the actual internal resistance of the battery. This is usually very uncontrollable and depends quite a lot on the battery used. The low quality battery that the manufacturer has installed has a high enough internal resistance not to cause a too high current. But if you swap it for a good quality alkaline with a much smaller internal resistance a very high current will pass through the LEDs in the flashlight. This will cause them to have a very short life. Don’t ever connect a LED directly to a battery!

This is probably the simplest circuit that is able to provide a constant current for a led.

In order for the whole circuit to function properly, the input voltage given by the power supply needs to be at least 1V higher that the voltage required for the led. This is because 0.6V will drop on RS and at least 0.3V will drop between the Collector and Emitter of the transistor. So, roughly 1V higher is needed.

This circuit is a linear power supply; this means that the transistor will drop almost (except 0.6V that falls on the resistor) all the difference between the power supply voltage and the LED voltage. This causes it to dissipate power, PT1 = (Vbat – VLED) * ILED, roughly. Choose a transistor that is able to dissipate at least 50% more than you calculate. And make sure that you cool it with sufficient heat sinking.

The power dissipated on RS is Pr2 = 0.6 * ILED.  Again, choose a resistor that is capable of dissipating more than this, I recommend at least double.

Now let’s have a look at a similar circuit. 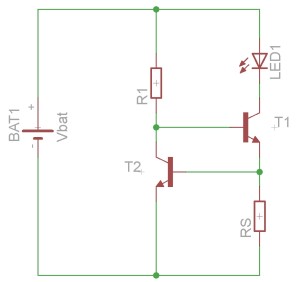 The principle of operation is somewhat different, but still simple. If T2 would not be there, R1 would provide enough current to fully open T1. That would not limit the current through the LED. But once T2 is in place, when the voltage across RS reaches 0.6V it opens and starts consuming the current that R1 supplies, leaving less for T1. This ensures that the voltage across RS is always 0.6V, which means that the current through the LED is ILED = 0.6/ RS, therefore constant. The same rules as before apply for T1, RS, and R1. T2 generally needs to be a low power transistor, e.g. BC547.

One advantage of this circuit is that mounting T2 on the heat sink used by the LEDs can provide some thermal compensation; the current through the LEDs will decrease as they get hotter.

Another advantage of this circuit is that you can replace T1 with a power MOS transistor: 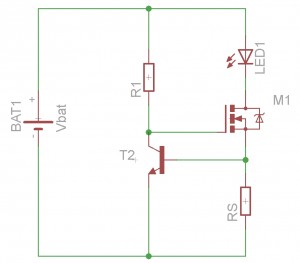 The last 2 circuits can be modified to be controlled by a microcontroller, such as for providing PWM control.

Schematic requires only minor modifications, as it can be seen below: 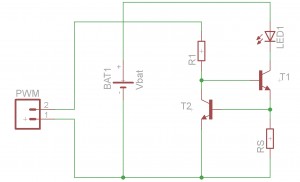 PWM signal can be applied through R1, which needs to be calculated the same as before, but taking into account the voltage given by the microcontroller (for example 5V).

LM317 is a widely used voltage regulator, but it can also be used as a constant current source. The schematic comes from the datasheet, the operating principle being very simple. As the regulator will try to maintain 1.25V between Out and Adj pins, the current through RS will be constant, and equal to ILED = 1.25 / RS. 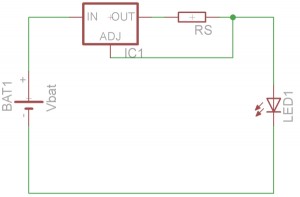 Following this principle, basically any voltage regulator can be used as a constant current supply, but it is a rather poor solution.